Photographer Katie Murray’s series entitled “Lost Boys” was featured at Saatchi Online. The work was selected by Rebecca Wilson. Wilson is the former editor of both ArtReview and Modern Painters.

“Lost Boys” is a result of Katie Murray’s travels with the prog-punk band, An Albatross. These pictures are portraits of boys/young men, generally in their teens and early twenties, which reference the history of portraiture in photography by engaging in a similar subject matter to that of Brassais work in the 1920s. They also infer the formal and psychological aspects of August Sander and Diane Arbus portraits. This work was made up and down the east coast of the United States at various noise punk shows, where a specific kind of androgynous sub-culture exists. Here, there is a sense of rebellion, as if this is a last stance against conventional societal. They revel in their isolation from the norm, however uncomfortable. 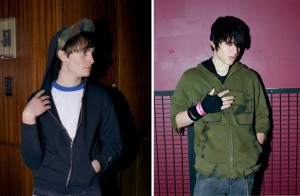 New work by Erik Carter for Town and Country! 📸

Quiet moments in Wellfleet by 📸 @arseniiv